We visited Havana recently and the city wowed me. The dramatic history of the city thanks to Spanish and British of older time and American and Russian influence is very interesting. Old Havana looks like a Spanish city attracted many intellects to herself such as Ernest Hemingway. There is bar with his name that apparently he used to visit very often. Some of these charming building are falling apart but who can blame Cuban for not having renovation on top of their list. 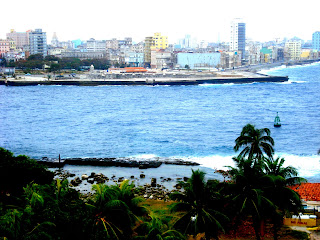 Our tour guid was a middle age man, fair skin and deep green eyes who spoke fluent English. He talked about Cuba with a painful pride. He loved his country was tired of being trapped in time. He didn't want to see his country another province of USA but in his own way he admitted that comonism is not working. He said: "when humans are not motivated they won't work hard.You cannot pay the same money to the one who work hard and the one who stands and do nothing.  But change is coming" he said with a hopefull tune. " when you come back again you will see how fast Cuba will change". He said with please-come-back-again-soon impression in his voice.

I felt like unfortunate situations trapped these people in time. After thirty something years still trying to show the revolution spirit is in the air is surreal. Every where there are photos of  Che Guevara ; every where I mean; on the wall, postal cards, and even mugs. I really doubt that a man like him would ever imagined that one day he will be a major icon in Cuba to attract tourists who like to buy his imprinted mug, magnets, plates, ceramics, etc. 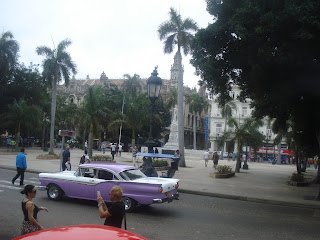 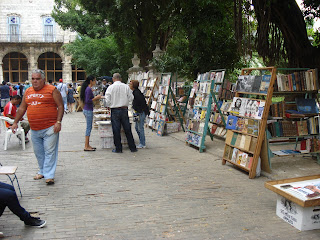 You will see different races of people white and colored in the city which to me is another interesting feature for Havana. Old American Cars, fresh Cohiba cigars, the exact Replica of the White House, the hotel that biggest Mafia meeting took place in, Bay of Pig, the square that young Castro had his longest speech of 9 hours... are all part of what form this city or country I should say. 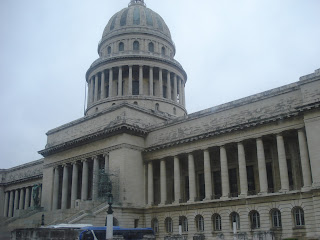 So far I visited part of Mexico, Dominican Republic and now Havana. My first impression from people I encountered, including the hotel staff, stranger in street, the bus driver, tour guide , etc is that  Cuban are more serious, mostly educated ( education is free in  Cuba) and are into politics ( considering how much the government is involved in people everyday life I am not surprised).

Dear Hiva, nice travel report from Cuba. I always wished to visit the country, for its open-minded people and complex cultural heritage, but at the same time was too much afraid that many details of a socialist economy would painfully remind me of 28 years I lived under similar conditions. Somehow I instinctively felt, that I could easily fall back into the laissez-affair life-style (which I could imagine many Cuban people would like to leave rather today than tomorrow).
But your observations of the hispanic culture flair reminded me a lot of a short visit I ones did to Nuevo Laredo in Mexico, just cross the boarder from Texas. Crossing the bridge over the Rio Grande was like a journey from the US around the globe to southern Europe. For me it was a very relaxing and picturesque day, only back home I red that Nuovo Laredo is plagued by the worst narcotic war and cruelity one can imagine (but this was not obvious to a stranger). Cuba, as much as I know, albeit its economic difficulties, is a very friendly society and crime almost unknown. But unfortunately, this is not enough to make a whole country viable in the long term when the economic structures can not provide what the people want. As Bertold Brecht, himself of course a big proponent of socialism, ones paraphrased it. "First comes the foodstuff, moral follows later".
There is, however at least one aspect of life where Cuba beats every other nation in the world: it is the efficiency of its health care system. Although Cuba can afford spending for health care per person not more or even less than south-american countries, the life expectancy in Cuba is in the range of US or Western European countries (where the spendings per capita are more than 10 times higher). The "Cuban health care miracle" lays in the way they spend the money: it goes to a large degree into prevention and health education, instead of expensive medication as in the West. Maybe dancing Son, absence of western junk-food, smoking cigars but no cigarettes, less stress at work and less air-polution also contributes to this.

PS: Thanks a lot for listing my blog in your collection.