Have we travelled far enough, that we can allow our tears to fall?
A beautiful quote from a movie we watched last night
Posted by Hiva at 6:56 PM No comments: 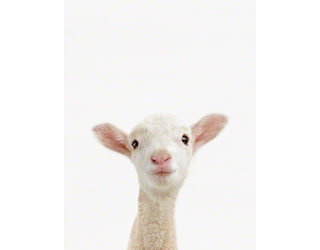 I saw Its face first on the website called The Houzz. It just entranced me. I couldnt took my eyes off its little cute face. I could see the innocne in his face but it wasnt just that. Its pink smiling lip, pink shining little nose, pink ears standing up showing his awarness, and the way he kept his head high up showing his pride all bewitched me. I found the photographer Sharon Montrose's website she is a baby animal photographer. :)
After a week keep looking at him I finally order the print, now I am going to hang Woolly picture somewhere I can see everyday. To me his face is full of life, very positive and optimistic, he  looks curious and funny.
It's interesting yesterday I was watching this TED video by Jane McGonical a game designer who was saying looking at baby animal's face actually increasing your life span.   There you go Woolly on the wall :D Love it

I spent a week with Behi and Behrouz (my cousin and her husband). I am recharged, happy and calmer now. We haven't been together this long since I came to Canada which is about 7 years. Every morning Behi prepared lovely breakfast table: 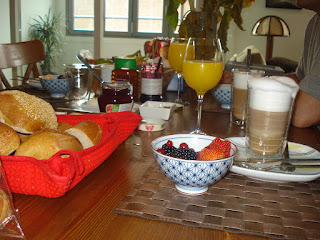 1- A bowl of different berries: red gooseberry, blackberry, strawberry and rasberry
2- Freshly baked baguette, buns and croissant tasted so good
3- Bulgarian cheese tasted very much like Tabrizian cheese of Iran
4- Butter
5- Sunny-side Eggs
6- A glass of freshly squeezed orange
7- Cappuccino
8- Tea, different kinds offered in a beautiful French tea box
Nima was telling me he still thinks about us sitting around a table for an hour enjoying the meal and chatting. 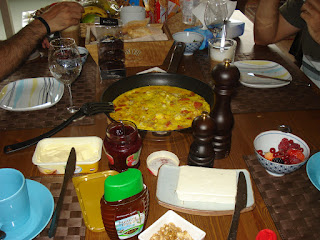 Behi and I talked. I bombard her with any topics I wanted to tell her but didn't have a chance. We tried to tell each other how much each of us changed since last time we have been together. We realized we both grown up.
Behrouz always liked photography and this time I noticed that he came a long way and becomes a very skilled photographer. He showed us some of the photos he has taken, which was absolutely brilliant. He took a gorgeous photo of Nima and I with Eiffel tower. That day there where hundreds of people around the giant metal tower but in the photo it's just Nima and I with the Eiffel alone. I have the photo beautifully sitting in our TV room reminds of so many good things.
I told Behi this phrase from the Lord of the Ring movie, there is a scene that Boromir coming back from a victory celebrating with his brother Faramir. He said to him "Remember Today little Brother, Today Life is Good".

We knew we couldn't see Paris in 3 days thus we decided to sample the most romantic city of the world.
My colleague told me " listen if you needed to ask for guidance from Parisians, remember three things 1) they like greeting 2) they like to be acknowledged and 3) ask them if they can speak English but in French.  thus if you need to ask you will say Bonjour Madam/Monsior, parlez-vous anglais?

Taking advice from my sister and brother in-law who are experts on Paris "things to do", and my colleague, we headed to Paris from Rotterdom on express train.

Did the city wowed me? Oh yeah, just one word "charmant"

Narrow streets pointing to a charming hill or a church, infinite number of cafe and restaurants, boutiques. My sister in-law told me drink as much coffee as you can, my brother in-law told us try baguettes anywhere you can. We did our best :)

We went to this restaurant recommended by my brother in-law "Le Relais de l'Entrecote" which was famouse for its steak with the most addictive sauce. The sauce recipe apparently is a secret, many men tired never succeed to remake it "un tel secret". We loved the food the steak was amazing and thin sliced French fries were unbelievable. We went back there the night after I think, we became addicted after the first try. :D

Another place that I liked very much was a pastry shop called "Pierre  Herme" the Picasso of the pastries as Navid said. Colorful fresh macarons with different tastes very yummy, the pastries looked very sexy each has a unique design. I got three pastries each cost about 6 Euro worth every penny :) my cousin Behi got 6 macarons with different tastes we ate them all on train back home except for one which is still in  the fridge waiting for a right moment to be eaten.

Paris is alive city I feel. Many people are stylish, woman with makeup and accessories are adding to this city's charm. Watching many people sitting outside of the cafe drinking, eating and watching pedestrians all sounds cool to me. So many smokers in streets got my attentions I should say. Metro lines were so many but the subway stations were kind of unpleasant because of strong smell of urine, litters here and there. Well nothing is perfect.

right behind Notre Dame Cathedral, on Pont de l'Archevêché I bought a lock for 3 Euro, wrote Nima's and my name on it, hardly found a spot on the bridge fence and put the lock around it. I throw the key into the river. Can I find the key if I came back after years? Who cares


I do have some pretty pictures that I will share later.