A Trip In a Glance

Kissing Nima goodbye
Having 1 hour delay in flight to St. John's
Settling down in MUN grad lab with my suitcase ;)
Texting to Nima
Having dinner with Eily and Ashkan my lovely friends
Meeting Shawn, my supervisor from 9 to 12
Talking to Nima on the phone
watching my supervisor gorgeous twins, surrounded in the most colorful toys
Calming my mom on the phone after a bad dream my younger sister had about me
Having a good laugh with 15 Iranians of MUN at UC
Catching up with close friends
Wishing a friend having fun at Hawaii
Solving middle east and the world problems after having delicious dinner
Counting 10000 sheep after a late night tea
watching pretty Asian girl having extra large coffee for the breakfast
Meeting my British smart supervisor early in the morning, talking about 'English got talent' show
Reading an article that Harper government is going to sell another company
Hiking a long way with Eily
Licking an ice cream while my friends are talking
Talking to Nima before sleep
Counting another 10000 sheep
Blogging Friday morning in grad lab
going to have presentation in the afternoon

Monday early in the morning I have a flight to St. John's. I had some last minute shopping, thus Nima drove me to the nearby mall. The initial plan was that he drop me off at mall and head to gym himself. Right before he dropped me off I saw an old man trying to sit on a flat stone, suddenly he lost his balance and fell down on his forehead.
Nime stopped a car right away and I ran toward him. There was blood allover his face.

-You OK? Let me help you sit down

I looked at his face, it was like an old wound open up. the cut was deep and it was bleeding strongly. Two other young girls also hurried toward us.

We helped him sit back and press some clinex on the wound to help his bleeding stop. 911 asked different kind of questions, I think it took about 5 minutes.
- how old is he? (a 911 operator asked)
-How old are you? we asked him
-I'm 90 something (he answered), I was in world war II (he added)
-Does he feels drowsy?...Is he diabetic?...Is he using specific medicine? (and some other detailed questions that operator asked before deciding to send an ambulance.)

-Good, they are on their way. (a girl who was talking on the phone said)

At this time another car stopped and a lady came out.

-Is he doing fine? (she asked)
- I am a nurse, let me check him! .. she came closer, looked at his wound. Then ask him if he know his name. if he has any numbers, we could call. She looked at his wallet and find a phone number. She called and found his wife on the line.

-Mam your husband fell down in front of the mall, he is fine now. the ambulance is on the way. She brought a bottle of water and helped him drink.
-OK guys I'm living now the ambulance will be here soon. Talk to him don't let him sleep

We start talking to him, one of the other girl asked him about his experience in war to keep him awake.

-How much time do you have? (an old man asked)
-I have time, I should have time, to help you so maybe one day when I fell down someone else take care of me (the lovely girl answered)

Nima went to guide the ambulance toward us. Finally they showed up and we could leave.
We say goodbye to them. The all things took about 40 minutes.

These days I'm busy making slides, writing reports..In two weeks I have another trip to St. John's to meet my supervisors and to attend a conferee. When I come back, in less than a week I'll be on my way to Iran. It has been more than a year and a half that I haven't seen my family.

My mom was telling me she starts making my favorite jam, drying some vegetable from our yard so that I can bring them back. When you are away from those who you love, you really don't feel it until you go back to them. Right there you feel , Gosh what I was missing. I was talking to couple of friends who haven't seen their families for more than 5 or 12 years. For me it sounds impossible.

Anyway it's going to be a very busy month for me but I like it this way. My heart becomes wam by the idea of vising my family again..Cheerssss
Posted by Hiva at 6:52 AM 7 comments: 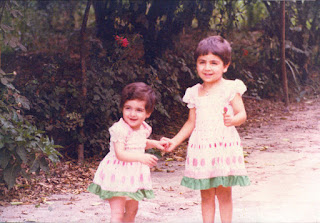 I love these photos of me and my older sister Roja. We are standing hand in hand in my grandpa backyard, wearing the same dress; Roja has a flower in her hand .
My dad took these pictures from us. Photography was one of his major hobby...
In the background you can see a part of my grandpa garden. 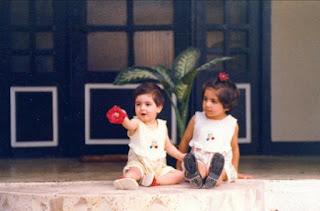 In this one we are sitting right in front of the house entrance door. ..I love these photos, I really do :))
Posted by Hiva at 11:07 AM 7 comments: