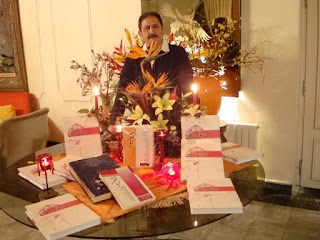 thousand and thousands of books on wooden shiny shelves; I am running through narrow corridors made by several book cases; playing hide and seek; I am 8 or 9. I loved the place I still do "daddy's library".
As far as I remember my father was always there all the afternoon till 9:00 pm, writing, reading working passionately. The library got bigger and bigger through the years right now he has more than 20,000 volumes in there. Some of the books are quite old, he bought them when he was a teenage boy.
As the time passes he became more interested toward the history first the world's and after that Iran's. He did a handsome of research first by a group of 8 to 10 other writers with similar passions and interests. The group worked together for almost 12 years before they broke up. I remember the up-stair floor used to be dad's library. For several years my mom did her best to keep the house quiet enough not to distract the group of researchers working with my dad on a book called "Encyclopedia of Biographies". When the first volume came out it became the book of the year. But the group didn't last long after that, one of the writers who happen to be a close friend of my dad betrayed his trust. He secretly copied all the Bios the group had been gathering for the years and left. My dad with several other member of the group tried hard to prove he stole the data but they couldn't.
After that heart breaking incident my father sail the boat alone. My mom was always supportive and encourage him to follow his passions. My father gradually became more and more interested in an Iranian historian called "Beyhaqi". He went through his book "Tarikhe Beihaghi" which is the history of Iran in the 11th to early 12th century. He gathered information about every single person named in the book and found out a lot of new things about people who were mistaken before with some other men. It took him several years to complete his book considering the fact that the research part is his passion not a job . Today my father's book is published. I know how much in means to him.
They had a small celebration back home, I wish I could have been there. Dad I am so proud of you. I hope your book find the place it deserves.

I hope too Hiva joonam and so happy to hear that! Congratulations to him and to Mojgan joon who's always been a great supporter of him and his work :)
Kisses

Hiva jan,
This is such a wonderful accomplishment! Many congratulations!

Dear Hiva, It is so nice to hear from your dear father´s accomplishment. Me too, I am proud of him. Congratulations to you and your dear father, honey. Kisses :). (Nasim)

Thanks a lot Nassim jooon

That's a really interesting story you told there.

There are persons who seem to be unable to distinguish between friends and not friends or honest people and not honest people. That's truly a burden to carry and more troublesome than being short sighted.

I had a look at Beyhaqi in Wiki. First to find out what BCE means and then about the historian. Well, there is a mistake you copied from Wikipedia. All this happened not in BCE (Before Common Era) but in this era, meaning Anno Domini in the 11 Century, about 900 years ago.

One last thing Hiva: can't help thinking Iran is the only Muslim country interested in Science and fundamental research that does not bring immediate rewards. And the Iranians abroad prosper wherever they go and whatever they do. Another big difference and if you have some time to spare tell what distinguishes Iran from the sorry lot.

Thanks for correcting me, I edited my post :)
About your question, I'll get back to you ASAP :D

This is my personal opinion based on my personal experience and observation. Iranian are far less religious that what their regime pretends to be.
Many Iranian are not as religious as other Muslim countries and many of those Iranian who practice Islam, doing it as something personal rather than going around and preaching others. When I came to Canada I had a Yemenis office mate (a very nice fellow). He told me once that "You Iranian does not care about Islam, I never saw any of you come to Friday pray" and he was right. Even my religious friends here in Canada don't go to Friday pray.
If you ask me why Iranian are less religous, I think because:
1- they are sick of it. when you are being obliged to do something you probably end up hating to do so. Iranian Islamic regime tried to obliged many religious stuff on people with in 30 years and it didn't work. People have their mixed parties, serving alcohol, etc . People learned how to go around the laws. You can do anything in Iran you just need to find the right person.
2- Iranian history and culture, and the fact that ancient Iranian (Persian) used to practice Zoroastrianism. There are still some people who blame Islam for all of the problems Iranian are dealing with (which I personally disagree)
3- In Reza shah era (I think about 70-80 years ago) and in his son's era, the government sent many young Iranian people to European/western countries like France. These fellow got their degree overseas and came back to Iran. Many of these guys became very-well known minister or intellectuals of Iranian modern history. These people have their own affect in the society.

4- the last thing come to my mind is Reza shah's attempt to make Iranian people less religious , he even assigned guards to remove woman's scarf in streets. This is irony considering the fact that now the Islamic government assigned some guards to arrest those who does not wear the scarf properly.
That was one long comment :))

Thanks for explaining in depth how you see your ex-country (because I imagine you are Canadian now).

The Shah (I mean the last one) may have had his shortcomings but I can't help thinking that he did his best to curb religious influence and tried to put it where creeds should be: in a quiet corner with very little traffic.

I was a bit astonished to hear that Iranians are not so religious. Well, could be right for those leaving the country but as to those living there? The Muslim clergy was not alone toppling the Shah and his regime. Seeing those old documentaries around 1979 there were millions in the street. What did they imagine?

Well, that's history and who knows. Maybe Iran will be first in first out. Meaning being the first ones to establish a really liberal and democratic regime and lifestyle.

about those "millions in the street" as far as I know, many of them were lefties, Comonists, etc. back in 1979 there were thousands underground parties with different phylosophy and ideas and they all had one thing in common " no more dictatorship, no more monarchy". No one exactly knows how the revolution ends up to "Islamic Republic"
in the first few years after the revolution, the new regime executed more than 4000 people (many of them still teenagers).
...They gradually force women to wear scarf... Anyway I hope people all around the world one day reach to better understanding of the value of life, cherish that ...
Cheers

Great!
Congratulations to you and you father :)