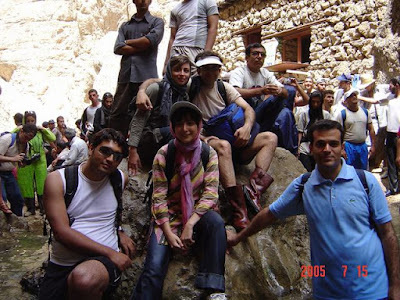 Today July 15th is the 5th anniversary of our (Nima and I) first meet. I remember 5 years ago this day, with a group of my friends and colleagues we went to a picnic out of town. It was a beautiful Fall called "Savashi" we went to. We were about 5-6 cars and we arranged to meet each other at the beginning of the trail. I noticed there were some new guys that I didn't know apparently they were my friends' friends. I went to them and introduced myself. My close friend's husband introduced Nima to me. We shook hands :D

Then our hike began. To reach to the fall we had to walk along the river. Water was so cool makes the hot summer weather tolerable. Sara another good friend of mine told me:
"Hiva do you know who Nima is?"
I already forgot which one was him. Sara pointed to a boy with cream shirt and blue cap who was walking a head of us.
"He is the older brother of our TA in Physics I"
"Is he?" I asked surprised. "They don't look alike at all"

Nima and I had small chats once in a while. He was concerned about his camera not getting wet. Gave me a tip how to carry my backpack properly so not to hurt my back. Asked me about my admission from MUN university. On that day I could never imagine in about a year and a half we would get married. I would never imagined that boy with a blue cap and a camera gonna be the one.

I guess that's life, a box full of hidden surprises. It's short and time's flying. Just try to enjoy every moment...

P.S In the picture you can find me in a colorful (mostly pink) scarf and mantue, posing to the camera with my friends. Savashi Fall is right behind us and Nima is at the left corner minding his camera :D
Posted by Hiva at 7:14 PM

Such a nice fun refreshing post!
Happy anniversary and hope you guys live a happy healthy prosperous life together...

BTW, the last time I went to Darreh Savashi was 6 years ago. It's one of the most beautiful natural sceneries of Iran...And that water, was cold indeed! :)
Thanks for sharing your memories with us.